Souvlaki: A bit of history! 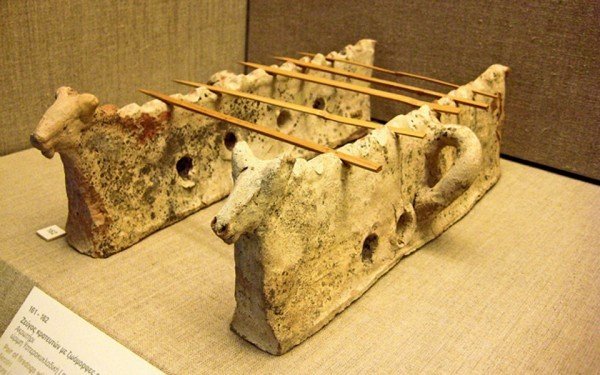 Ancient Delight, immortal in the passage of time. Perhaps the most basic delicacy of Greek gastronomy, but also one of the most famous ones! Ladies and gentlemen, I present you the souvlaki.

Sometimes considered as fast food, others as just traditional, it is one of the most typical and popular dishes you will try in anywhere in Greece.

Multicultural food, souvlaki, is above every social and class difference. It is a delicacy for every person who supports his roots with traditional gastronomy, respecting his origins. A delicacy that has been developed, modified and evolved as no other in the times.

It has unlimited forms, pork, chicken, round, donor, haloumi, souzouki and sausage. Tangled with various materials other than the classic, tzatziki sauce, tomato, onions and parsley, while we find it with potatoes, sauces, lettuce, cabbage, paprika,…and basically with everything you can imagine.

The first references to souvlaki are in Homer books, and in particular in the Iliad. King Priamo, came to Achilles and begged for the dead body of his son Hector, who he killed the previous day in the battle. Achilles, according to Homer, offered him a meal of truce, where the two men enjoyed for the moment the blessing of peace that was forgotten in the horrors of war.

A royal meal with “κάνδαυλο”, that is, small pieces of lamb or goat meat passed into small spits, cooked in special hatcheries to remove the fat, the -in Greek- “κρατευτές”. Those were the ancient Greek grills where souvlakia were cooked.

References of the ancient delicacy are also mentioned from the ancient cook ,Athenian in his work “Dinopoesophists” and also from the Hgisipos in the cooking guide “Ospirtakos”, which describe moments of food pleasures with small pieces of lamb or goat meat, with cheese, dill and thickened meat broth.

The souvlaki was spread by the Greeks in all the kitchens of the old times in various ways. In Roman writings of the 1st century AD we have  descriptions of giblets from guts.

The word “souvlaki” in greek essentially means the spit or skewer , which in turn comes from the Latin word Subulus. After the fall of Constantinople (what is now Instabul) , vendors sold souvlaki with pita bread in the streets, except for fruits and vegetables.

The form of the dish changed to Greece with the arrival of the refugees from the Greek-Turkish war of 1919 and the eventual loss of Greece.  . The refugees that came to Greece from Asia Minor (mainland Turkey)  translated their art and knowledge, including in bakery. The first ovens from the refugees were opened in Athens making pita bread for souvlaki, which until then did not exist for Greece. That had as a result the blend of the ancient Greek souvlaki with the kebap they had in the newly formed at that time, Turkey.

One of the refugees in N. Philadelphia, Mr. Andreas Zafirakis, bought one of the most famous ovens of the time and started the production of Pita Bread. With care and diligence today his grandchildren continue the traditional recipe of the pita bread, with the same principles, in the same area.

Nowadays the pies are baked in an electric oven on a rolling tape, while the “pressing” of the pie is no longer done with hands but with a special machine. The production of the pie for souvlaki is at least 250,000 a day and exports to the world are only systematically made by Greek companies.

The taste always refers to images but brings us back to personal memories. During my childhood in Greece I always remember the local tavern cooking souvlakia during summer time and the smell travelling on all the houses. As we all had the windows open to get some fresh air and cool down from the heat it was impossible to not smell them.

Many times I fought with my mother to let me eat one for dinner rather than what she had prepared for me. I don’t think I wanted to eat them because of the taste – but because of the whole procedure.

I enjoyed the fact that I was going in the hot afternoon to the tavern with 200drachmes on ny pocket and ordered 1. As I was waiting I was looking how the owner grilled the meat and  the pita bread with a bit of olive oil and oregano.

It was a ritual!

Sauces full of spices and herbs await to accompany the roast lamb cantals in a unique gourmet trip.

“Should I put it in a package, Antonis or will you eat it now?” The local owner used to ask me.

“Ill eat it now”, and by the time I was back at home I had finished it.

It usually consists of baked pieces of pork, passed through a small wooden reed spoon , which is usually served with a slice of bread or a pie cut into four.

We also find it from chicken meat (which if wrapped with bacon is converted to “κοτομπέικον – cotobek“), beef meat, a combination of lamb and kebab, burger, and even sausage.

The more … graceful version and usual nowadays of it is wrapped in a baked pie, which is very often a round, ie minced meat accompanied by tomato, onion, jatsuki and potato.

In northern Greece, the above version, necessarily includes, besides tzatziki and other sauses , such as ketchup and mustard, while in recent years many taverns have also launched its vegan version of grilled vegetables.

In Cyprus, souvlaki is always served in Cypriot pie, which in its content is a full meal. The Cypriot pie sometimes has chopped cabbage.

Obviously, there are local variations, such as the habit in Larnaca to put on pie and tahini, or the habit in Limassol to put pickles. Finally, in contemporary Cypriot cuisine we will also find haloumi souvlaki (semi-hard white cheese made from a combination of cow and sheep and goat milk and can be baked on the grill or pan without melting).